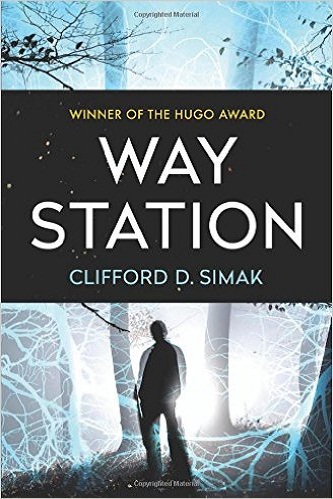 “Enoch Wallace is 124 years old, the last survivor of the Civil War, living as a recluse in the woods of southwest Wisconsin. For reasons of their own, aliens have selected Enoch to run an inter-stellar way station, a hub of their galactic transportation network that enables aliens from planets across the galaxy to travel instantaneously from one star system to another. Because the aliens have decided that mankind and earth are not yet ready for membership in this galactic federation, Enoch must labour in splendid isolation and keep the station’s secret to himself. Inevitably, Wallace’s astonishing longevity attracts notice and the US government begins to investigate both Wallace and the odd happenings at his house in the woods.” By Paul Weiss

“Clifford D. Simak’s Way Station is simply one of the most original and best SF novels ever written. Long considered a masterpiece, published in 1963, this story remains as fresh today as when first written. Though the theme has often been explored, the plot is one of a kind. So different that it remains unduplicated after almost 4 decades.
The theme of the book revolves around whether human society is worthy of inclusion in galactic society, mainly because of its warlike tendencies. Written in the era of the Cuban Missile Crisis, and the nuclear uncertainty surrounding that era of the Cold War between the USA and the Soviet Union, Simak weaves a tale that was modern when written, but timeless in retrospect. This theme has recurred again and again in actual society, such as during the Vietnam War, the Gulf War, and now the War against Terrorism.” By OhSayCanYouSee1