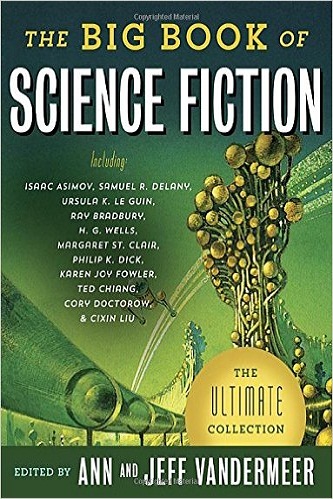 “I’ve only read about three stories in it so far and they’re all top-notch very good story selections of works by some of the best in their field.

I will update in more detail as I read more of the book since again as I said I just received it.

My reason for writing a review this soon is because this book is so cheaply made it is already falling apart, and I’ve only owned it for two days.

Be warned, the pages are newsprint quality, and the cover is a simple thin piece of paper, this is a book loaded with great stories but its construction is 100% shoddy.” By Edmond Dantes

“This book might have been better titled “The Big Book of Short Science Fiction,” because it comprises 105 short stories and short-story-like novel excerpts. These are arranged in chronological order, from H. G. Wells’ “The Star” to Johanna Sinisalo’s “Baby Doll.” Editors Ann and Jeff Vandermeer explain that the earliest works were chosen for their clear influence on later science fiction. The book’s timeline eliminates many seminal works such as Mary Shelley’s, and its introduction even spends some time discussing the influence of the 16th-18th century contes philosophiques on Jules Verne. However, the focus is wide enough to include works (some translated for this anthology) originally published in languages other than English, such as Silvina Ocampo’s “The Waves” and Vadim Shefner’s “A Modest Genius.” By A. J Terry